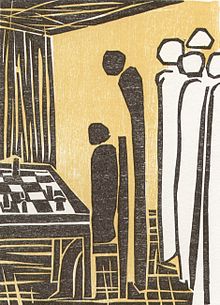 I was inspired by the recent chess world championship to read a famous short story about Chess simply called ‘Chess’.

It’s by an early 20th century Viennese – Stefan Zweig – who as a cosmopolitan Jewish intellectual fled Austria in 1934 during the drive to a Nazi led Anschluss . He tragically ended his life in despair about the future of Europe in 1942.

Early century Vienna is a fascinating time and place haunted by its future. I wanted to see how Zweig would integrate that history with Chess.

The story is set just after the Anschluss. In it we hear how the main character was interrogated by the Nazis in order to reveal secrets. Unusually they don’t use direct force or intimidation but instead try to break him using isolation and boredom. However, a chance find of a chess book gives the main character a mental escape. He is occupied and therefore stronger in himself and better placed to resist the interrogations. Except it turns out to be a dead-end. Chess becomes all-consuming till eventually the obsession breaks his mental health. A friendly Doctor helps ease him out of interrogation and instead he is exiled. This is where the character meets the narrator. Fatal chance would have it that a world champion offers him a game and once again Chess seems to have taken an obsessive hold.

However, I’ve felt compelled to write out the plot because the themes are thin, certainly thinner than the setting promises. Ultimately I felt the stronger influence of psychoanalytic principles – specifically ego and Id separation. It didn’t feel realist enough to avoid the suspicion of being a curiously distant metaphor for Zweig’s own exile. Which is a shame because the period is so important it should stay close to the events.

All in all – the story is good but not great.

The ingredients promised plenty but never really combined. It’s almost too simple a story – it needed something to immerse it in the game of chess itself. A little bit of symmetry between game and story would have created vast depths.

Instead it’s all a bit shallow and direct – like the ending which doesn’t just hint that the obsession has returned but unsubtly makes it clear.